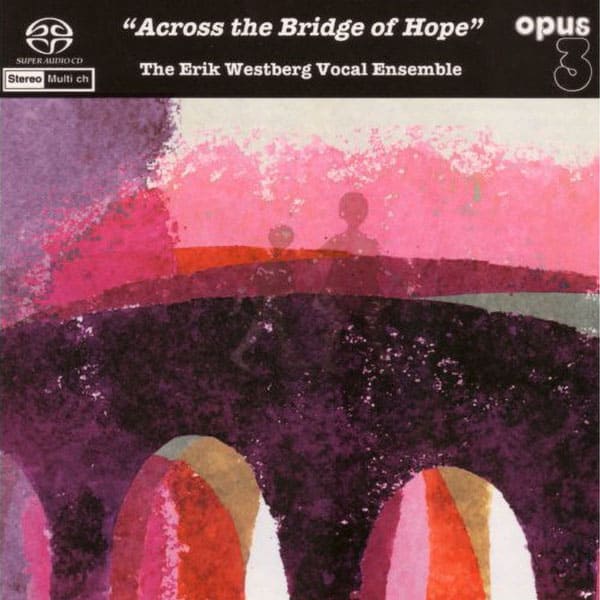 Across the Bridge of Hope

Across the Bridge of Hope was composed for the Millennium celebrations and its premiere performance was on the stroke of midnight between 1999 and 2000 as a worldwide relay passed on from choir to choir around the world with the Erik Westberg Vocal Ensemble giving the first and last renditions.
When the Irish president, Mary McAleese asked Irish school children to illustrate the theme ”Building bridges” Shaun McLaughlin and his classmates chose to write a poem, which they presented to the president in June 1998. Two months later the terrible bombing in Omagh took place and one of the victims was the 12-year old Shaun.

Orange and Green - it doesn't matter,
united now don't shatter our dream,
scatter the seeds of peace over our land,
so we can travel hand in hand
across the bridge of hope.

A choir could be said to be the ultimate example of different people working together in harmony to create a thing of beauty. The advent of the millennium and its themesong of Hope which was sung around the world has been the inspiration behind the idea of this choral record with a difference. As you will hear, Oscar Lindberg's ”Pingst” (Pentecost) and the hymns of Otto Olsson can be heard along with the more rhythmic ”Claviante Brilioso” of Thomas Jennefelt. ln addition we also hear an example of the indigenous music of Lapland, ”Biegga Luohte” with its barking dogs, animal calls and birdsongs.

Anders Åstrand from Global Percussion Network, perhaps Sweden's most outstanding percussionists, adds an additional facet to this jewel of a record. This album is a musical adventure, as much for the musicians as for the listener but this isn't the first time Opus 3 has got off the beaten path. Some pieces require only a few minutes in order to surprise you. That's the case of "Bagatelle", superb, with accompaniment by marimba and vibraphone. "Psalmus CXX" and "Rex Gloriose Martyrum" are both sacred songs masterfully rendered by warm-voiced chorale. And if you love percussion, track 4 is definitely for you. Don´t refuse the invitation to discovery with superb SACD multitrack sound by Jan-Eric Persson.
U H F Magazine, Canada