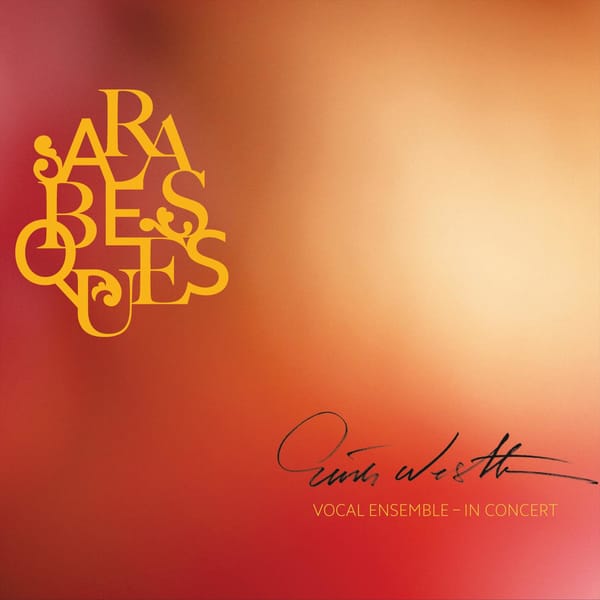 Lilith is supposed to have been the first wife of Adam. Created from the earth itself she was granted the free will. But, as she refused to obey God nor Adam, she was expelled from Eden and Eve was created from one of Adam's ribs. The story is intriguing and captivating. Just like the music of the Orient.
Daniel Lesure's composition over the texts from the Song of Songs lets the listener travel onward through the Levant area and into the unknown regions of Arabia. Jan Sandströms' Fatima is a sweet love ballad with a tonal language from Kurdistan. Many of Sandström's works tend to be built around ethnic songs or melodies, like his composition over Johan Märak's jojk. Oriental tunes and scales, interpreted by a Swedish listener and composer, french interpretations of the texts of Bible, stories from antiquity - it's all delicate and finely interwoven.

Here is magnificently balanced singing from one of Sweden´s most accomplished chamber ensembles (sixteen voices) named for its founder and director, a worthy successor to his teacher, Eric Ericson. By the sound of it, Westberg´s chosen venue for the recording, the Studio Acusticum in the northerly city of Piteå, is an ideal setting for a performance captured at close hand. All of this, and the conductor´s precis direction, means that we are hearing (largely) unfamiliar repertoire performed to perfection. So only your personal taste will decide what you find appealing.

The CD arose from a program Westberg put together in 2011 that rather archly is described as “music with the perfume of France and the scent of Arabia” – hence the title Arabesques. Appropriately; the two major works are by Swede employing Arabic musical instruments and scales – Mats Larsson Goethe (b. 1965) – to tell the story of Lilith, and a Frenchman – Jean- Yves Daniel Lesur (1908-2002) inspired by the erotic poetry of The Song of Songs, These major cycles are complemented by the Norwegian Lasse Thoresen’s "Mon Dieu, Mon adore" and André Jolive´s "Madrigal", in three movements. The latter was closely associated with Daniel Lesure in "La jeune France", a group of composers particularly drawn to mysticism, a quality that is evident in abundance on this disc. However, the program opens with the most arresting of all the selections, a piece clearly conjuring an Arabic spirit, Fatima, by Jan Sandström.

Accompanying much of this repertoire are the players of NEO, based in Pitea's county of Norrbotten; as their names suggests, they specialize in new music, and include in their ranks some of the country´s finest instrumentalists. They make deal partners in this recording. However, they are absent for the unaccompanied "Cantique de Cantiques", by Daniel Lesure, a work already recorded by several fine groups, including that by another Swedish ensemble, the Mikaeli Chamber Choir (conducted by Anders Eby), but Westberg´s is worthy to stand comparison with the other version available.
Choir & Organ