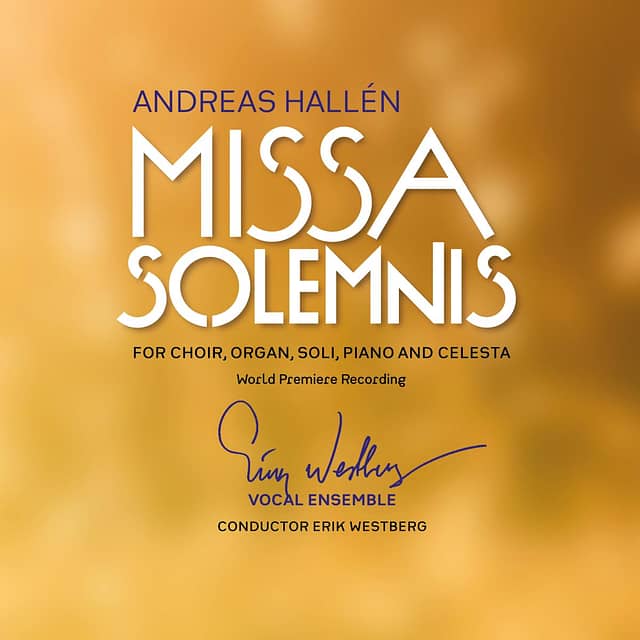 Missa Solemnis (1920-21) is a monumental, hour-long work for choir, a quartet of vocal soloists, organ, piano, and celesta. The work was premiered in 1923 at Engelbrekt Church in Stockholm, but has only rarely been performed since. The work is now available on CD for the first time.

This recording is part of the Swedish Musical Heritage project sponsored by the Royal Swedish Academy of Music. The project aims to increase access to and promote the performance of hidden treasures from the Swedish repertoire.

Andreas Hallén (1846-1925) was one of the most important figures in Swedish musical life from 1870 until his death. He was known contemporaneously as an orchestral, opera, and choral conductor in Gothenburg, Malmö, and Stockholm, as well as a critic and ultimately as professor in composition. Today, he is remembered as a composer, first and foremost of operas inspired by Wagner’s musical dramas. He also wrote many choral and orchestral works.

His musical language is high Romantic with strains of National Romanticism. Missa Solemnis is characterized both by operatic grandiosity as well as a more delicate style appropriate to sacred music.

The composer set himself a major task - a more than hour-long sacred work. The organ drives the music forward, and both choir and soloists handle their parts in an optimal way. The pure, brilliant sound of the choir and Thimander’s soaring tenor voice bear particular mention. … Hats off!
OPUS Magazine

The composer Andreas Hallén’s choral work Missa Solemnis was premièred in 1920 - but only now, a century later, has it been recorded, by the Erik Westberg Vocal Ensemble … The Ensemble is one of Sweden’s top choirs and a driving force within its choral life.
Swedish Radio P2