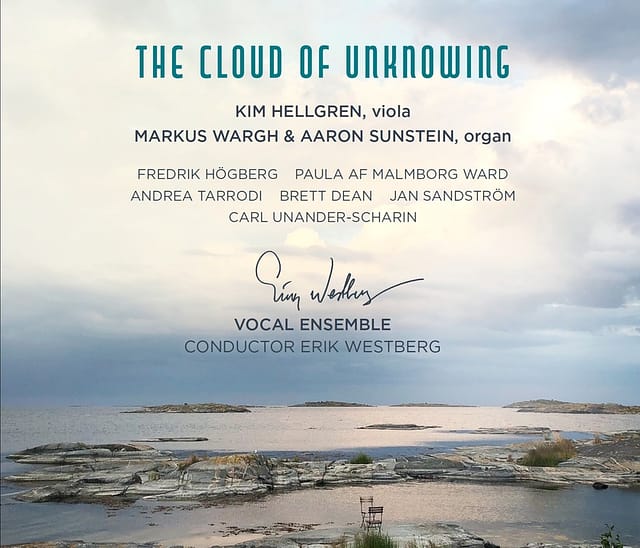 The Cloud of Unknowing

In The Cloud of Unknowing we present new Swedish repertoire, beginning with Fredrik Högberg's ingenious Why Do You Dance? for choir and viola with soloist Kim Hellgren. Kim is also featured on Andrea Tarrodi's cinematically beautiful Poppies in October. The deep sound of the viola melts into the choral sound with elegance, forming a single organic entity. These works are part of The Vocal Ensemble's Voice of the Viola series, with the goal of expanding the existing sparse repertoire for choir and viola.

Acclaimed Australian-German composer Brett Dean is also a violist. His musical landscape inWas it a Voice?  brings out the passion of the Christ in juxtaposition alongside the snow-clad timbres of Norrbotten, which can be discerned in Paula af Malmborg Ward's Sunplay – 55 bars before dusk, as well as in Jan Sandström's Lux Æterna for double choir. Lux Æterna is an early work of the composer which has been newly paired with the Latin liturgical text. It exemplifies Sandström’s gift for creating a rich choral sound even as a young composer.

The Cloud of Unknowning is a six-movement piece encompassing a range of expression from the intimate to the virtuosic. As a professional singer and organist, Carl Unander-Scharin possesses a keen understanding of nuance when these two worlds of sound meet to form a new musical challenge, imbued with rhythmic vitality, intricate polytonality and sensitivity to the ancient text.

Between 2010–2020, Kim Hellgren was the violist in Norrbotten NEO, Sweden's leading ensemble for contemporary music. They have made several recordings and premiered a large number of works at festivals around the world.

Markus Wargh is active as a concert organist and Cathedral organist in Luleå Cathedral. As an interpreter, Wargh often returns to works by Bach as well as to the great Romantic virtuoso organ works. Aaron Sunstein works as a soloist and educator at the School of Music in Piteå, Luleå University of Technology.

Erik Westberg Vocal Ensemble was formed in 1993 and consists of 20 singers from northern Sweden and Finland. They have premiered about 60 commissioned works and were involved in the project Choral Singing for Peace and Justice with a tour in Tonga and Samoa at the turn of the millennium. Since 2003, Erik Westberg has been professor of choral conducting and choral singing at the School of Music, Luleå University of Technology.